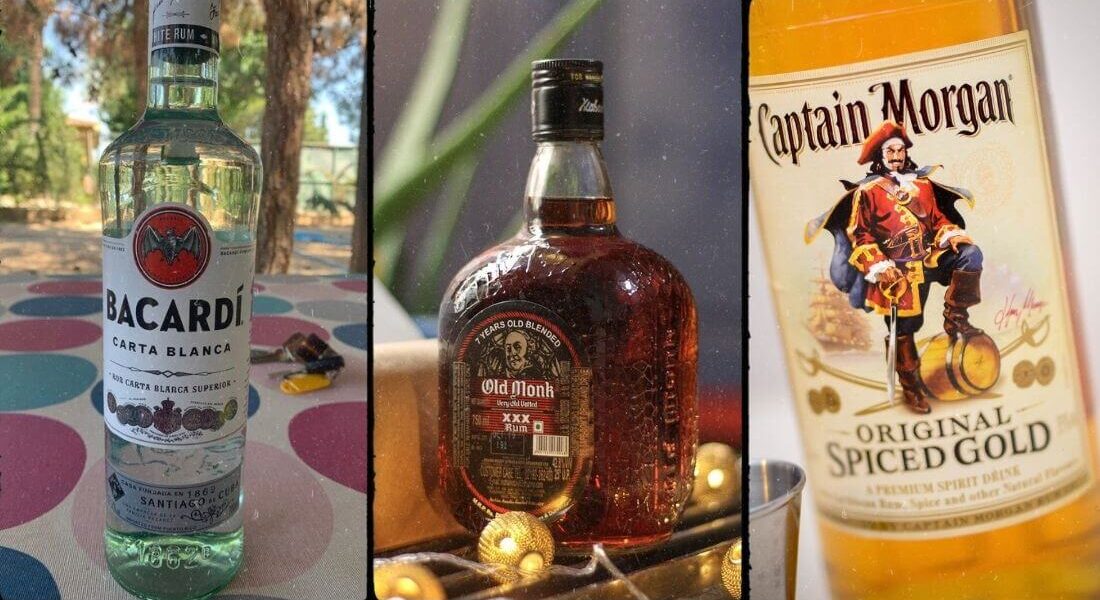 The best drink you can ever have during cosy weather is a good rum mixed with coke. Indians have always been inclined towards dark spirits such as dark rum. Rum is one of the highest consumed liquor variants in the Indian market and the best part is that most of rum brands are affordable. Like Old Monk rum from India, countries like Bermuda and Caribbean islands also have some great rum brands that you can explore. We have tried to curate a list of the best rum brands in India that you need to try this season.

Here is the list of best rum brands in India with price:

An iconic and probably the best budget-friendly rum brand in India is Old Monk. Launched in 1954, this dark rum has become a cult in itself for Indians. Old Monk is blended for a minimum of 7 years, with a mix of vanilla, cola, spice, roasted coffee beans, and caramel flavours. The rum is being produced in U.P.’s Ghaziabad and sold across the globe. Another interesting fact about this brand is that they have been market leaders in the budget rum brands without advertisement. Old Monk is enjoyed best with a mix of Coke and spicy appetizers.

From the makers of the world’s rum brand, Bacardi Black is a dark rum in the budget-friendly segment. The rum is aged up to 3 years in heavily charred oak barrels, lightly filtered through charcoal to retain its unique colour and aroma. Bacardi Balck is gluten-free and has as low as 0.9 carbs per serving (1.5 oz). The brand has various variants of rum and is widely available across liquor shops in India. This rum is popularly used in making party cocktails and some food dishes as well.

A white rum from Bacardi that has sweet and fruity on the palate. Also known as Bacardi Superior, this rum it’s widely used in making light refreshing cocktails like the Mojito and Daiquiri. It is one of the best rum in India that is available in terrific fruity flavours such as Apple, Strawberry, Lemon, Grapefruit, Orange and Raspberry. The brand was founded in 1862 and holds the largest market segment in the rum liquor space.

Another classic pick in the category of the best rum brands in India is Captain Morgan. It derives its name from the 17th-century Welsh privateer of the Caribbean, Sir Henry Morgan. Captain Morgan is made from sugarcane which is distilled to perfection and has rich flavours of brown sugar and aromatic spices. The rum is budget-friendly as well as has an incredible spiced flavour which makes it ideal for making fancy cocktails.

One of the best-selling, as well as most consumed rum brands in India, is McDowell’s №1. Produced by the United Spirits Limited (USL) in India, this rum has a sharp taste of vanilla and caramelised sugar with a hint of tea leaves and dry tobacco. McDowell’s is a dark rum launched in 1990 and has won overtaken Bacardi as the ‘world’s best-selling rum brand’ in 2015.

One of the best rum brands not only in India but also in the world is Malibu. This Caribbean rum has a rich coconut aftertaste which makes it different from all these best rum brands in India. If you want to know the taste, it’s like a Hawaiian vacation in your mouth. Malibu rum has a flavour of mixed passion fruit, pineapple, mango, island melon, and banana. It is best enjoyed with a mixer such as pineapple juice and fresh fruits. The brand is owned by Pernod Ricard and is one of the best rum you’ll ever have.

Also Read: 21 Best Vodka Brands in India That You Need To Try

Popular among the defence forces of India, Hercules Deluxe rum is one of the top-rated affordable rums available in the market. The brand has a white as well as dark rum variant and the best part is that it doesn’t leave with a hangover. Hercules’ Deluxe 3X dark rum is the most commonly consumed variant of the brand across India. It has a rich, complex flavour and goes down the throat very smoothly.

This one is not a rum instead it’s a rhum which is a more natural form. A premium yet one of the most epic rhum made with the finest selection of sugarcane juice and distilled to perfection. Clement Rhum has a gentle and oaky finish which is the closest you will get to pure, natural rhum. This rhum is crafted and matured carefully and is a must-try for every rum lover once in a lifetime.

One of the world’s oldest commercial rum distillery, Mount Gay is sold in more than 100 countries. This is a Barbados rum produced by Mount Gay Distilleries Ltd. Mount Gay has a distinctive flavour. It was introduced in 1703, this rum has 4 different variants namely- Mount Gay Silver, Mount Gay Eclipse, Mount Gay Black Barrel and Mount Gay XO. When you take a sip of this rum, it gives you a subtle hint of spices and has the aroma of banana as well as vanilla.

Known for its aged signature blend Appleton Estate is an authentic Jamaican rum. The rum was introduced in 1749 and is the favourite brand for many rum enthusiasts. It is crafted with Jamaican limestone-filtered water and has no added flavours. Appleton Estate has a super smooth taste and the palates have a hint of nutmeg and exotic spices.

Another Caribbean rum brand has one of the best rum collections and is loved by Indians. Also known as House of Angostura, this rum is a blend of light, medium and dark rums that have all been ageing for at least seven years. It is widely known for its smoothness and deep flavours of tamarind, clove, and cinnamon. They have white as well as dark rum but are most popular for their dark rum variant. Angostura’s rich and warm flavour of vanilla makes it perfect for making fresh cocktails.

Introduced in 1806, it is the official rum of Bermuda and one unique fact is that it has a popular cocktail named Dark “n” Stormy dedicated to it. Goslings is a bold textured black rum with a rich and well-balanced flavour of vanilla, butterscotch and caramel. Apart from that, it also has a warm and spicy finish that lasts long in your mouth. It is Bermuda’s largest export. One of the premium yet affordable rum brands in India that you should try.

A popular Caribbean crafted rum that is an exceptional blend of selected vintage rums and is very smooth. El Dorado is produced by Demerara Distillers in Guyana and has a unique taste. This rum brand has won many international awards which proves that it’s worth a try for rum lovers in India.

Ron Zacapa Centenario is a premium and one of the best rum brands available in India. Produced in Guatemala, this rum is a blend of rums aged 6-23 years. It is made with first-press virgin sugar cane and aged using the Sistema Solera method. They offer four different variants of the rum, namely- Zacapa 23, Zacapa XO, Zacapa Edicion Negra and Zacapa Royal. This brand has one of the most smooth rums you’ll ever taste in your life. Also, this dark rum is a perfect companion for making exotic cocktails.

A budget-friendly authentic dark rum brand, Jolly Roger has a rich aroma and well-balanced natural taste. The rum is made by blending matured Jamaican pot-still rum and natural spices. Jolly Roger is manufactured by Allied Blenders & Distillers (ABD India) and is very popular in the South Indian market.

Cabo White rum is a Goa-brewed rum with a delicious coconut taste that gives you beach vibes even if you can’t be a the beach. This rum is currently available in Goa in all liquor and wine shops quite easily. If you are someone staying in Goa during cool and rainy weather, this white rum will be your perfect companion along with wide some spicy snacks. It is made with a blend of coconut extracts making it the perfect mixer for cocktails like Pina Colada or other exotic drinks.

Segredo Aldeia Rum is a rum produced by Fullarton Distilleries which is based out of Goa, India. Its Portuguese name means ‘Secret Village’ as this craft rum was inspired by French pirate Olivier Levasseur who seized a bounty from a secret village in Goa. It is made with a blend of jaggery and cane making it wholesome in taste. It has two variants: Cafe rum (dark roasted with coffee beans) and White rum ( a clear spirit with a hint of vanilla).

Makazai is another homegrown premium rum brand based out of Goa. The name Makazai means ‘I want in the Konkani language and is suitable for it. It is available in two different variants: Gold and White rum. Gold has elegant fig and honey taste notes whereas White rum has a floral and sweet taste with a hint of vanilla. It is currently available in Goa and plans to expand soon to other states.

Sailor Jerry is a spicy flavoured rum with a pleasant aroma of vanilla. This is a Caribbean-style smooth rum with a rich flavour and a good amount of alcohol content. It is owned by an American tattoo artist named Sailor Jerry (Norman Keith Collins) who is known for his sailor-themed tattoos. Mix this one with a cooler like a mojito or refreshing cocktails during a winter evening and you’ll thank us later.

One of the most expensive and best rum brands on this list is Ron Matusalem. It was started as a family tradition by the Camp brothers in 1872 which over the years became popular. This premium rum offers a fruity and nutty taste with an aroma of chocolate and caramel. Apart from that, it also has rich notes of vanilla and is processed through the Solera ageing process which makes it so exquisite.

Barcelo is a 1930-founded Dominican Republic rum brand with a classic taste. Currently, the brand has around 8 variants of its rum which are sold in more than 50 countries. It is the fourth largest exporter of rum worldwide. Looking at the features of this rum, it has a strong and spicy flavour paired with an aroma of chocolate. The caramel hint of this rum hits your taste notes quite well.

We hope you had fun exploring these top rum brands in India. Cheers!