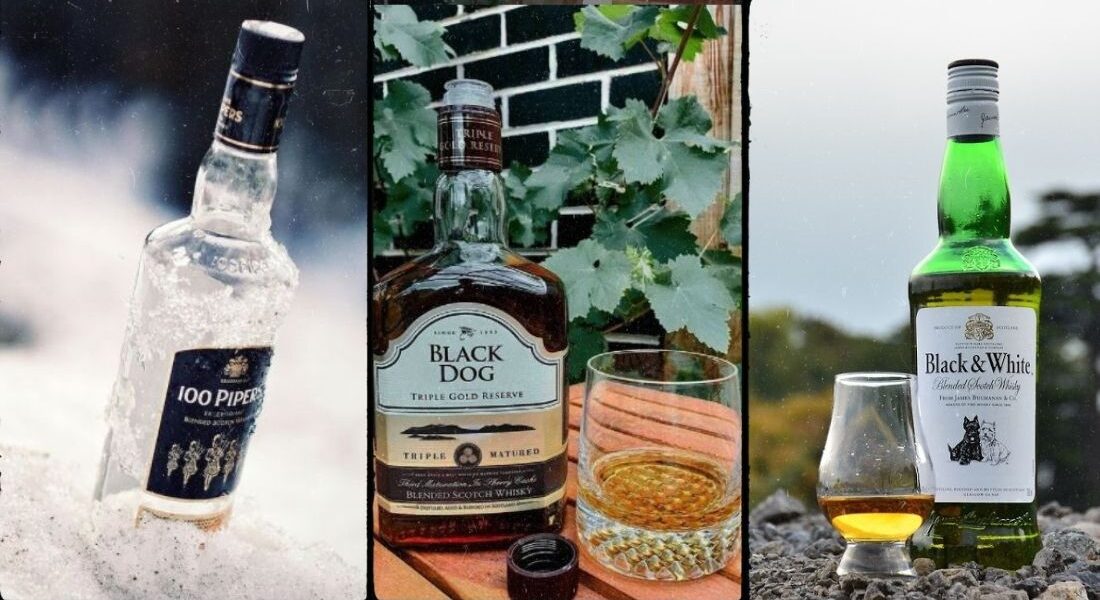 In the words of George Bernard Shaw, “Whisky is liquid sunshine” and today we’ll be looking at some of this liquid sunshine. Be it a friends party, birthday, anniversary or you just wanna chill after a busy day at work, a glass of whisky is just perfect. As Indians, we consume as well as produce a lot of whiskies in the country. Here we have tried to compile a list of the best whisky under Rs 2000 in India.

All these premium whisky brands are smooth and are of superior quality. These 15 great quality whiskies are available for less than only Rs 2000 for a bottle of 750 ml. The prices of the bottle might vary in different states in India.

Here’s the list of best premium whisky brands under ₹2000 in India:

A premium whisky brand from Seagram’s, 100 Pipers is the seventh-largest blended Scotch worldwide. ‘100 Pipers’ gets its name from the Scottish tradition of bagpipers who led soldiers into battle. The whisky is very smooth in taste and has subtle smoked notes. It has an ABV of 42.8% and apart from India, 100 Pipers is also popular in Spain, Venezuela and Australia.

One of the most popular whisky brand under this segment is Black Dog. A Scotch Whisky that was first blended and bottled in Scotland in 1883. The blended whisky has an aroma of matured wood and gives you a subtle feel of silent sea waves spreading in your mouth. Black Dog is also popular in countries like Sri Lanka, Bangladesh and Malaysia. The whisky has four variants but here we’re talking about Black Reserve as it fits the budget of under Rs 2000.

VAT 69 was first created by William Sanderson in 1839. This scotch whisky is a perfect blend of fruit and spice. The Vat 69 has an amazing and pleasant aroma with a smooth taste. This whisky brand also hails from Scotland and is now part of Diageo liquor brands. The whisky has a special edition for special forces called VAT 69 Commando.

Another premium whisky brand originated from Scotland, Black & White is a blended scotch whisky. This whiskey is definitely a little over the budget but its taste and aroma compensate the same. The Black and White whisky blend has the sweetness of ripe, juicy fruits, and subtle fine dark chocolate. It can be consumed neat or with any mixer and the best part is that it is popular for its non-hangover qualities.

Teacher’s is an award-winning whisky with rich and smoky notes. This malt whisky has a silky texture and makes a great companion for parties, wedding functions or just to chill. It has a distinctive combination of flavors which makes it popular among the masses. You can enjoy it in cocktails or neat as well. The whisky was first introduced in 1884 and is now part of Pernod Ricard liquor brands.

One of the most popular bourbon whisky brands in India is Jim Beam. It is the highest-selling American bourbon whiskey and the recipe of this has been passed to generations. Jim Beam has been crafted by the Beam family and distilled with high-quality ingredients and values. In 2014, the brand was purchased by Suntory Holdings.

Introduced in 1827, Ballantine’s is a premium scotch whisky that’s made with a blend of 50 single malts and 4 single grains. The whisky is super smooth in taste with a hind of apple and floral aroma to it. It is the world’s second highest-selling whisky with a range of blended scotch whiskies. If you are looking for the best whisky under Rs 2000 in India for parties, this should be your choice.

First bottled in 1835,  Old Smuggler is a blended scotch whisky named after a whisky smuggler who traded around the islands of Scotland. The blend of the finest Scottish malts and Argentinian spirits whiskies make it super smooth. The brand is now part of the Campari Group, an Italian liquor conglomerate.

A very uniquely named whisky ‘Kucch Nai’ which means Nothing in Hindi is gaining popularity in the alcoholic beverages market. This pun named whisky has a smoky taste and is a blend of Highland malts with a touch of Islay malt. Ordering it in a pub or bar in India would be quite an experience due to the punny name. The whisky is also available in countries like the UK, Australia and Canada.

With a 40% ABV, King Robert II is a blend of grain and malt whiskies bottled by Ian Macleod Distillers Ltd. This whisky is sold in more than 40 countries and is a leader brand in five of them. It tastes thin and watery mouthfeel with a hint of orange zest and rich honey. Another premium and top whisky brand under Rs 2000 in India.

From the Johnnie Walker comes an affordable yet premium scotch whisky named Red Label. This scotch whisky was introduced in 1909 by brothers George and Alexander Walker. Johnnie Walker Red Label has a sophisticated and smoky finish and a hint of cinnamon and white pepper aroma notes. Currently, it is being sold in more than 200 markets across the globe.

Justerini & Brooks or popularly known as J and B is a blended scotch that was founded in 1749. This scotch whisky is made with a blend of 42 Scotch single malts and grains. It has a finish of oak and cinnamon with a hint of toffee and malt. The drink is perfect for cocktails and with other mixers as well.

Owned by Bacardi, Dewar’s blended scotch whisky is one of the smoothest whisky you’ll ever taste in this price segment. This brand was created in 1846 by John Dewar, Sr. A unique fact about this blended whisky is that it is the world’s most awarded blended Scotch whisky with more than 500 medals. If you want a smooth and chill vibe while hanging out or partying, this is one of the best whisky under Rs 2000 available in India.

Another super smooth scotch whisky introduced in 1923 by Berry Bros & Rudd. This scotch whisky has a warming and malt finish with a hint of cut herbs and floral aroma. Cutty Sark is named after a tea clipper and is very popular in the American liquor market. The brand has 2 other variants of this whisky as well namely Cutty Sark Storm and Cutty Sark Prohibition.

Produced by William Grant & Sons, this blended whisky has a good zesty finish to it. This award-winning whisky is perfect for you if you enjoy mellow and sweet whisky that mixes well. It is a great companion for making exotic cocktails. Grant’s scotch whisky was first created in 1898 by William Grant.

We hope you enjoyed exploring this list of top premium whisky brands in India under Rs 2000. All these whisky brands have different taste notes and are made of high-quality ingredients. Enjoy these with homemade chaknas during birthday parties or weekend nights.

Hope you enjoyed these best whisky under Rs 2000 in India.