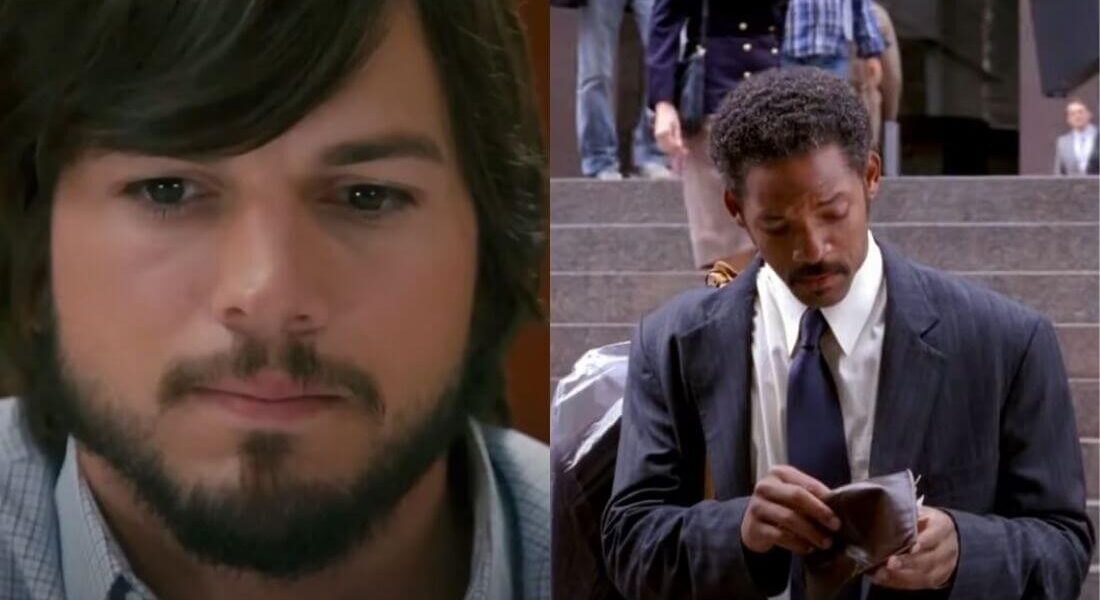 There comes a time where we all feel low and helpless in our life. By reading and watching the journey of others makes us believe that life is more about opportunities and fighting back. Here we have curated some 20 best motivational movies on Amazon Prime Video that will inspire your to never give up and keep grinding and hustling.

1. The Pursuit Of Happyness

Released in 2006, The Pursuit of Happyness is a biographical drama film based on the life of Chris Gardener. Chris was a homeless salesman whose wife decided to get separated and now he lives with his son with no home until he gets an unpaid internship at a brokerage firm and things take a turn for him. The movie stars father-son combo Will and Jaden Smith. The movie has won several awards and is based on a truly inspiring story. A must watch for anyone who thinks life is hopeless.

2. The Theory Of Everything

Another excellent biographical drama film based on the life of great astrophysicist Stephen Hawking. Released in 2014, this film takes you through the journey of theoretical physicist Stephen Hawking in detail and his life after motor neurone disease. The movie also shows his great work and theories in the subject matters like Black Holes and Big Bang. A must watch for everyone especially for those who love science. The cast of the film includes Eddie Redmayne, Felicity Jones, Charlie Cox and more.

One of the very early films of Ranbir Kapoor was Rocket Singh. The film revolves around the character of Harpreet Singh Bedi, who is a recent commerce graduate and trying to find the right balance between his colleagues in the office and his personal life. The film has mixed reviews from the critics but definitely has an inspiring storyline. Apart from Ranbir, the movie also stars Prem Chopra, Gauhar Khan, Shazahn Padamsee and many more.

4. The Wolf Of The Wall Street

Based on the life of a former stockbroker and felon Jordan Belfort, this movie is considered to be one of the best movie made about wall street. This comedy-drama shows the rise and fall of a wealthy stockbroker. From selling penny stocks to laundering money to cheating on his wife, this movie tells the true story of Jordan and how it all went into vain. The cast of the movie has legendary actors like Leonardo DeCaprio, Margot Robbie, Jonah Hill, Matthew McConaughey and many more. One thing that this movie tells you the best is how to sell anything.

Also Read: 10 Best Motivational Web Series In Hindi That Will Inspire You

Apart from revolutionising the computer space, Steve Jobs was also famous for his functioning style at Apple Inc. Released in 2013, Jobs is a biographical drama film about the journey of Steve Jobs as an entrepreneur and how he faced many problems due to his functioning style at Apple. The cast of the movie includes Ashton Kutcher, Josh Gad, Dermot Mulroney and many more.

If you are reading this, I’m definitely sure you must have had McDonald’s at least once in your lifetime. This movie showcases the story of how Ray Kroc, a salesman who changed the fortune of Mc Donalds as a brand. Ray realises that this brand has the potential to become a big fast-food chain across the globe. The cast of the movie includes Micheal Keaton, Nick Offerman, John Caroll and many more. The movie released inn 2016 and is available to stream on Amazon Prime Video.

Based on the real-life events that happened during the 2007-08 financial crisis caused due to the United States housing bubble. During that crisis period, few finance experts discovered the instability in the market and predicted that the US housing market will collapse. This leads to the exploration of the corrupt system and while all the stocks on the market collapsed some of them made millions and billions. The cast of the film has legendary actors like Steve Carell, Ryan Gosling, Brad Pitt and Christian Bale.

One of the best motivational movies on amazon prime especially for Bollywood lovers is Chak De India. The movie revolves around the story of Kabir Khan, a former star hockey player who is now appointed as coach of the national women’s hockey team. This is his chance to prove his loyalty towards the nation as in his past he was being doubted for it. The movie stars Shah Rukh Khan, Vidya Malvade, Sagarika Ghatge and many more.

A story of a poor boy from a small town in Rajasthan who derives his inspiration from former President of India, Dr A. P. J. Abdul Kalam. Chotu is so inspired that he changes his name to Kalam and wishes to meet Dr Kalam one day. The was produced by an NGO named Smile Foundation and starts actors like Gulshan Grover and Harsh Mayar. The movie has won multiple awards like Filmfare and National Film Award as well.

Imagine that your whole life is being telecasted on TV and you find out that your whole family are a bunch of actors. That’s the plot of The Truman Show and as Truman discovers this secret he tries to get out of it. This psychological comedy-drama has won multiple awards including Golden Globe For Best Supporting Actor. The cast of the film includes Jim Carrey, Laura Linney, Ed Harris and many more.

Released in 1994, this American classic drama film is the story of a man named Forrest who finds himself stuck in the middle of some key events in history. The movie is actually based on a novel by the same name and has a comedic aspect to it. Forrest Gump has also won many awards including the prestigious Academy Award For Best Picture. The cast of the film includes Tom Hanks, Robin Wright, Gary Sinise and many more.

From rags to riches, this is the story of Murad a boy living in poverty and facing social issues that he tries to express through hip hop and rap. Based in Dharavi, Murad meets MC Sher, a local rapper and things take a turn when they participate in a rap battle competition. The has won multiple Filmfare Awards and has great hip-hop music. The film is inspired by the journey of DIVINE and Naezy. The cast of Gully Boy includes Ranveer Singh, Alia Bhatt, Siddhant Chaturvedi and many more.

An American biographical drama based on the life of Mark Zuckerberg, the founder of Facebook. The movie takes you through the journey of how Mark as a student at Harvard created a social networking website that became a big part of this world. Apart from the success, the movie also shows problematic things that Mark as an entrepreneur has to go through. The film has won an Academy Award For Best Writing as well. The cast of the film includes Jesse Eisenberg, Andrew Garfield, Justin Timberlake and more.

Whiplash is a psychological drama film based on the life of a boy named Andrew, who enrolls in a music conservatory to become a drummer. Andrew is trained by an abusive and unconventional who trains him to be a perfectionist but is a trauma for him. The movie has also won an Academy Awards For Best Supporting Actor. The cast of Whiplash includes J K Simmons, Miles Teller, Melissa Benoit and many more.

One of the best motivational movies on amazon prime for Bollywood geeks is Yeh Jawani Hai Deewani. Story of a group of friends who plan to go on a trekking trip and they meet Naina Talwar. Bunny and Naina bond very much during the trip but Bunny is focused on his life goals and Naina couldn’t express her love. The cast of the movie includes Ranbir Kapoor, Deepika Padukone, Aditya Roy Kapoor, Kalki and many more.

Starring Tom Hanks, this American comedy-drama revolves around the story of Viktor Navorski who gets stuck at an airport due to a war in his country. The film is based on a true story of an 18 -year stay of Mehran Karimi Nasseri in Terminal 1 of Paris during the year 1988 to 2006. Apart from Tom Hanks, the cast of the film includes Catherine Zeta-Jones, Stanley Tucci and many more.

Released in 2004, Lakshya is a story of a young irresponsible man who joins the Indian Army and gradually emerges as a war hero for the country. His girlfriend is the reason he joins the academy after they broke up but now she is covering news report as they fight Pakistani invaders on the battlefield. The cast of the film includes Hritik Roshan, Preity Zinta, Amitabh Bachhan, Om Puri and many more. Another top motivational movie on Amazon Prime Video to inspire you.

A British drama film about a young brilliant boy who struggles to build a connection with others. Released in 2015, the story of the film revolves around Nathan, a math prodigy who gradually form new connections and gains confidence as he becomes part of a squad for the International Mathematics Olympiad. The cast of the film includes  Asa Butterfield, Rafe Spall, Sally Hawkins and many more.

Another American classic drama movie about a banker who gets arrested for the murder of his wife and her lover. For this crime, he is sentenced to life imprisonment at Shawshank prison. While being in prison he forms a special connection with another prisoner and becomes an unconventional prisoner. It has also won several awards across film festivals. The cast of the film includes Tim Robbins, Morgan Freeman, Bob Gunton and many more.

One of the best motivational movies on amazon prime is Chef. Chef is a comedy-drama film where a Chef named Carl Casper tries to start his own food venture by fixing up a food truck. Due to this experience, he gets closer to his son and family. A beautiful tale that is uplifting as well as inspiring. The cast of the film includes Jon Favreau, Sofia Vergara, John Leguizamo and many more. It has also been adapted and remade in Bollywood.