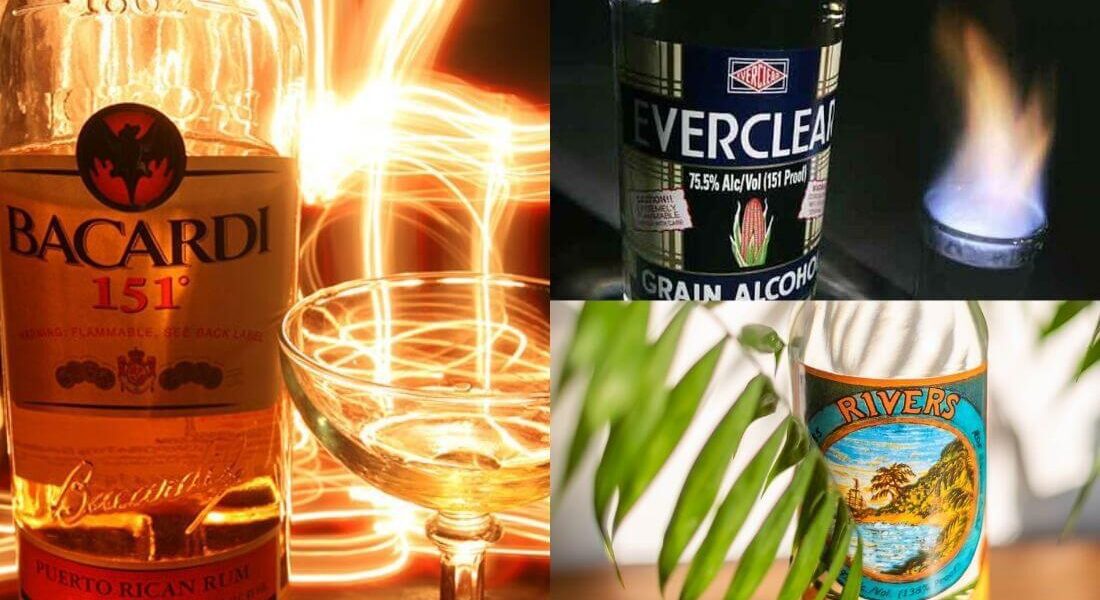 Alcohol overdosing is not something alien. We all have some crazy party weekends. When it comes to alcoholic drinks, there are certain drinks that one can easily enjoy and chill. On the other hand, some spirits can get you high to a whole new level. The overdosing of this might kill you as well. Yes, we are talking about the strongest alcoholic drinks in the whole world. These high alcohol content drinks are straight out of hell.

These high alcoholic content liquor are not easily available in India but are produced by renowned liquor brands of the world. These liquors are in the form of whisky, vodka, and rum. They reach up to a deadly alcohol percentage of 96. Scroll down and take a glance at some of the strongest alcoholic drinks in the whole world.

On that note, here are 11 of the world’s strongest alcoholic drinks, for all those who cherish the next level high.

Crafted by Bacardi Limited of Hamilton, this highly alcoholic rum is made in Bermuda and comes with a stainless steel fire arrestor. It is built into the bottleneck and is highly inflammable. This rum is usually used in making rum-based cocktails like Cuba Libre and Daiquiris. Don’t try to take this alcohol drink neat, it may highly damage your body.

With an alcohol percentage of 80, Devil Springs is one of the most underrated vodkas on the face of the earth. It is mostly used in making flaming shots and cocktails with juices or ginger ale as well. Make sure you don’t have it straight from the bottle if you want to be in your senses.

Not only this is one of the world’s most powerful rum, but it also has been awarded by World Rum Award the title of ‘The World’s Best Overproof Rum’ in 2016. The label on the bottle recommends explicitly that you drink it with a mixer because it can cause a burning sensation in your throat.

Popularly consumed in Sweden, this vodka is not so popular among the rest of the world. Made using organic grains and freshwater, this vodka has 85% ABV and requires one hell of a liver to handle. It can be very useful in small quantities to make amazing cocktails.

A triple distilled vodka and one of the strongest alcoholic drink you’ll ever get to know. An interesting fact is, it is colourless, odourless and tasteless. This vodka is super strong that contains 13 different label drinking warnings on the bottle. Balkan is decked with 88% ABV and is also reported cases of death due to alcohol poisoning after consuming this drink.

With an ABV of 88.88%, Princer is a high alcoholic vodka from Scotland. It is said to be healthy as well because it contains milk thistle and elderflower that is known to be good for the liver but, it can get you high very quickly.

Also Read: 10 Less Known Indian Beers That You Should Try For An Epic Weekend

Hapsburg Gold’s bottle comes with a label that reads ‘There are no rules’, but that’s not what we recommend. What we suggest is that you should have this drink with a mixer. This vodka is vastly consumed by creative artists who rely on original and ‘out of the box’ ideas.

Made from fermented sugarcane juice, this rum is based out of Grenada. It is made using an old technique of pot distilling which is a very slow distilling process. It has a whopping 90% ABV.

Introducing you to the world’s most alcoholic single malt whiskey. Bruichladdich X4+1 Quadrupled has an ABV of 92%. With the help of a 17th-century quadruple distillation method, this whisky is incredibly pure.

This is the world’s second-highest alcoholic drink. This grain spirit has a whopping 95 % alcohol and is highly flammable. It is highly not recommended for the people who have less alcohol tolerance level.

Presenting you the world’s strongest alcoholic drink. This tongue-twisting named vodka is based out of Poland. It has a suicidal 96% ABV. People have compared drinking this neat as to getting punched on the stomach by Mohammad Ali.

The above spirits are highly alcoholic and are recommended to be enjoyed with a mixture like soda, water or any soft drink. Please drink responsibly.

Hope you had fun exploring these world’s strongest alcoholic drinks. These are high in alcohol and needs to be enjoyed carefully.